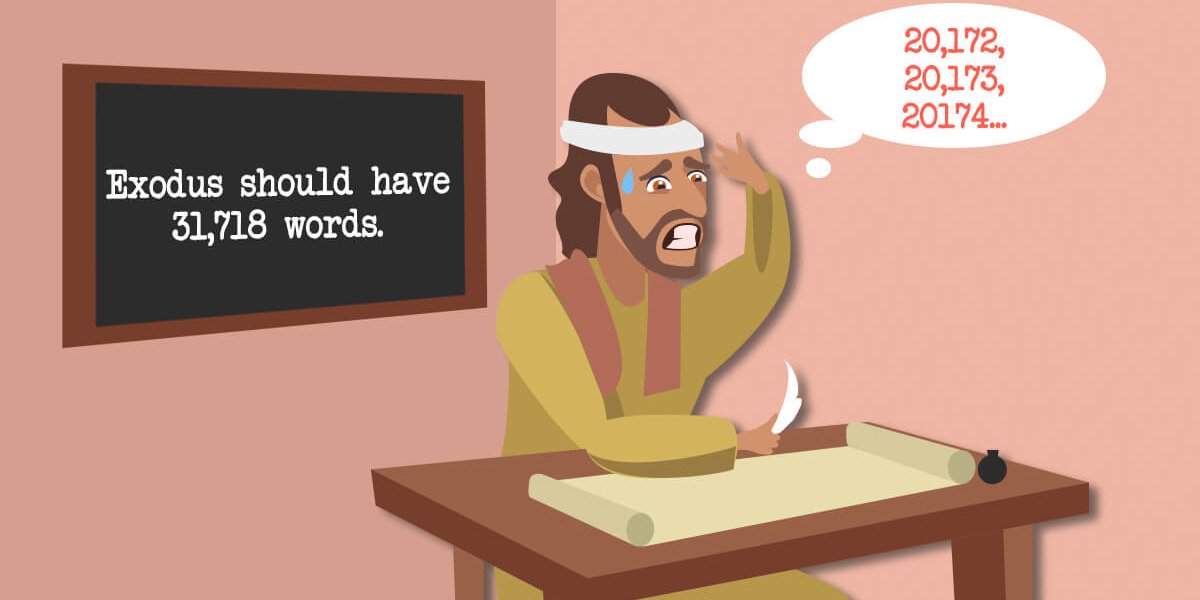 Getting the Bible Right

If readers expect that just about every book will contain a typo or two, why are they so quick to post a one-star review if they find a mistake in their Bible?

The higher standard for Bible publishing stems from readers’ view of this sacred book. From the beginning of the Bible’s history, the people of God have treated the written Word of God with the utmost care. Even Moses carefully guarded the newly received law of God by placing the original Ten Commandments into the ark of the covenant for safekeeping (see Deuteronomy 10:1–5).

That same determination to protect and preserve God’s Word influenced generations of Hebrew scribes for thousands of years, as evidenced by the Masoretes, who treated their sacred scrolls “with the greatest imaginable reverence, and devised a complicated system of safeguards against scribal slips.”1 It is said that ancient scribes counted how many times each letter of the alphabet was found in each book. They even went so far as to locate the letters that were in the exact middle of the Pentateuch and the Hebrew Bible, respectively.

Can you say meticulous?

That’s not all. Hebrew legend indicates that if a scribe was copying the Torah by hand and discovered he had made a mistake, he stopped his work, put down his pen, and burned the scroll. The slightest human slip could—and did—lead to a monumental amount of rework.

This effort did not deter them because this was the reverence the ancients had for God’s Word.

Today’s Bible readers hold similar values. They believe that the book in their hands does not just contain words but is the Word. It is God’s message that still speaks to their hearts and drives the way they live. As a result, perfection still matters when printing the Bible. Careful proofreading offers vital protection.

Below are four ways Bible proofreading serves readers and publishers.

Getting the Details Right: The Book of Exodus

Consider some of the subtle differences between popular Bible translations:

The Bible deserves to be protected because we believe it is God’s revelation to the world. In the sacred texts of the Old and New Testaments, God shows us what He is like, what we are like, and what it means to have a relationship with Him.

Our Scripture Integrity Team feels a powerful sense of responsibility whenever they sit down with the pages of a new Bible translation or project. We love God’s Word and want others to be able to read divine truth without getting sidetracked by glaring human errors. We believe God’s Word should be printed with excellent care so that people can engage it fully, accurately, and without distraction.

Since the mission of most Bible publishers is to help people read God’s Word, our proofing system is designed around that goal—to ensure that readers can discover God’s message free of avoidable distractions. By proofreading Bibles, we help protect the investment of the people who purchase those Bibles while also guarding their hearts as they seek to know God better.

Because only a handful of translations are considered public domain, most translations are copyrighted to a publisher. In proofing Bibles, we are protecting the copyright holder of each Bible version. The translators carefully and intentionally chose certain words. They agonized over the formatting to use for every line of Scripture. And even if we love a new design provided by the publisher, we flag a page that deviates from copyright requirements. We have an obligation to protect the text—and the client.

The translators’ thoughtful and deliberate wrestling with every matter leads to our strong sense of duty to honor their efforts. Our goal is to ensure that every Bible we work on preserves the translators’ intent and protects the copyright and mission of the publishing partner.

Our Scripture Integrity Team devotes hundreds of hours to every project we work on so publishers can avoid such nightmares.

Being meticulous with the Word of God matters.

Why does Bible proofreading matter?